I am starting a new scratch-build project - a Chesapeake Bay flattie. 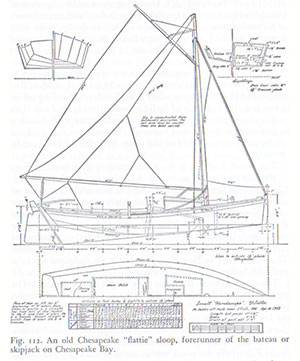 I am using plans drawn by Howard I. Chapelle as shown in his book, American Small Sailing Craft. Full-size plans (at 1:16 scale) are available from the Smithsonian.

The lines for these plans were taken off an existing boat that was built around 1880 or 1890. This boat was also called a "handscraper" because it was used to drag an oyster dredge that was raised and lowered by a manually operated "winder" or winch.The original was 25' 8-1/4" between perpendiculars so the model at 3/4" scale (1:16) will be just over 20-1/2" between perpendiculars. Because of the rudder, the overall length will be a bit longer.

At the time of starting the model (July 15, 2017) I do not yet have the plans from the Smithsonian, so I am using the table of offsets provided in the book to draw up the molds for each station. As of July 16, I have all the molds drawn as well as the keelson. Wood cutting starts tomorrow!

For those who may be interested in acquiring the plans from the Smithsonian, here is the info you will need:

You must send your order by surface mail to:

Today, I got the top parts of the molds and the keelson cut out. There is still a part of the molds that goes between the sheer line and the build board that I haven't cut out yet. There's also more work to do to the keelson, such as cutting out the centerboard notch. And, the molds will have to be beveled before I glue them down to the build board. So a ways to go yet before I start planking, but it's beginning to look like a boat!

A couple of days ago, I got the first plank on the starboard side. As of today, there are two planks on each side and I've started planking the bottom. The remaining side planks will get added after I install the side frames.

I now have the bottom planked, two planks on each side of the boat, and all the side frames installed. There will be one more side plank and a wale added to this.

Sides are now fully planked. Next step will be to put the deck clamps inside the frames and them make and install the deck beams.

I've been on a bit of a vacation for a couple weeks and September was filled with projects around the house, so not much progress.

So, my vacation ended in early October. Then I had some health issues, and then, for a long time, I just didn't feel like working in the boatyard at all. I've finally gotten back to it in the last week or so and progress photos are shown below. Next step is to work on masts and spars and rigging.

I finished the rigging today. I haven't added the centerboard yet - I want to wait until the model is permanently mounted. The next step will be to add deck stuff like oars, baskets, etc.

I have spent the last two days making a set of oyster tongs. LOTS of soldering!!

The model is officially finished as of today!!